Shanti Parkash Malhotra was born on 13 Jul 1940 to Sh. Vidya Parkash and Shanti Devi Malhotra at Wazirabad which is now in Pakistan.  He was named after his mother Shanti Devi. With three brothers and a sister, he is the eldest in the family. Having studied at various places in Haryana and Punjab Shanti Parkash joined Indian Army in Jul 1961. He was commissioned from Indian Military Academy on 11 Dec 1962 and was allotted Artillery. He was posted to 5 Field Regiment.

He served in the Indian Army for thirty-five years. During his service, in addition to some prestigious training courses he did a long missile course in the erstwhile USSR. He served in various parts of the country in the North East and in Kashmir and Ladakh. He held important command appointments like Commander of a Missile Group, Commander of an Independent Mechanized Air Defence Brigade and Strike Corps Air Defence Brigade. He was the first Major General Air Defense of a Command. His last appointment before superannuation was Commandant of Army Air Defence College. For his services, he was awarded ‘Vashisht Sewa Medal’.

Sh. Vidya Parkash Malhotra was born on 12 May 1912 at Wazirabad now in Pakistan. His respected mother Smt. Vidya Wati died a few days after giving birth and the child was thereafter brought up by his maternal grandfather’s family. Due to his pleasant nature and concern for others, Dad enjoyed love and affection of both families. Dad’s maternal uncle and aunties always treated him as their brother.  Sh. Vidya Parkash got married to Smt. Shanti Devi Kapoor on 18 Jun 1938. Bauji as respectfully called, always took all possible measures to look after the family (Mother and three children) in very dangerous situations during partition of India. After arriving in India on Aug/Sep 1947 he put in an amazing amount of hard work to sustain the family giving them all possible comforts. Being an educationist due care was taken to educate the children and ensure that all five children got into respectable careers.
Dad was also an excellent sportsman. He had played hockey (one match) for the Indian team. He also used to play tennis with bureaucrats in town. All members of extended family always looked up to him for help and guidance. All kind of help including financial help was never refused, rather it was given voluntarily. He had excellent sense of humor and was always seen cracking jokes and praising others. We are lucky to have had a dad like him. Sh. Vidya Parkash Malhotra left for his heavenly abode on 10 Nov 1996.
Today there is a scholarship at the DAV Public School at Karnal in his memory. In addition, there is a hall dedicated to him at the Lewistown Country Club, USA. The hall has a capacity for two hundred people to sit down and have a meal, a bar and a dance floor. This hall was planned, designed and constructed by Dr Rajesh and Dr ShashPal Malhotra and donated to the Country Club.  A golf tournament is held every year in his memory. 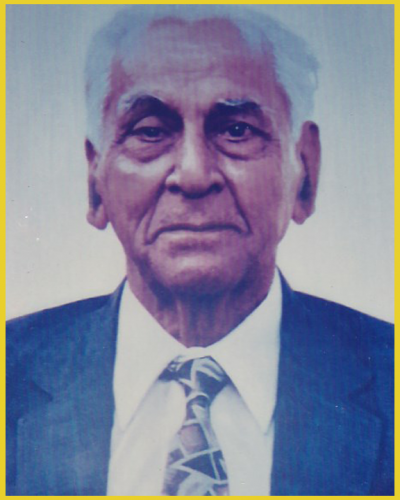 Our respected mother Smt. Shanti Devi was born on 15 Aug 1918 at Suhana now in Pak Occupied Kashmir. She had been very popular amongst relations both elders and youngsters. Her advice in any situation was ultimate solution and accepted by one and all. She had the capability to handle any situation howsoever complex and dangerous it may be. During partition of India, travelling in a train with three children (considering the situation, father had to travel separately in the same train) all attired as ‘Muslims’, she successfully hid the real identity and reached the destination in India from Pakistan.
She had been perfect partner with our dad in all activities, be these financial, social or education of children. She enjoyed immense respect   in society.
Her teachings played major role in keeping the family united.  She managed herself very well to stay independently at her house. She breathed her last at Karnal on 17 Oct 2012. Her towering personality will always be missed. In her memory Dr Shashpal and Dr Rajesh Malhotra instituted “Shanti Devi Malhotra Endowment for Women Health” in a renowned hospital in Lewistown, America. A big photograph of respected mother has been installed in the reception area of the hospital. There is a scholarship in her memory at the DAV school in Karnal.